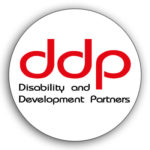 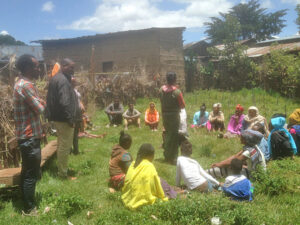 In April 2022 we dropped in on a gathering of people in the small town of Wotera, convened by their local Community Volunteer. Bayush, head of the Malga Women and Children Office, and Tamiru from Berhan Lehetsanat addressed the group.

While we were there, one woman reported that parents in the area had stopped forcing their daughters to marry. Another spoke up to say that she herself had been an FGM practitioner, but through her involvement with this project she had repented and converted to anti-HTP activism.

This group will gather each week for 6 weeks to discuss the implications of such practices, and finally agree their own bylaw governing the issue – and the action they will take in case of any future infringements.

This is just one of hundreds of such conversations over the course of our project, reaching all parts of Malga Woreda and over 20,000 of its citizens so far – even with the temporary ban on gatherings, then adaptations made during the COVID state of emergency. In this third year of the project, 8,169 people have taken part.

In the UK we often hear references to a nebulous ‘national debate’ but we could learn from the effective, beneficial cultural practice of community conversations. They will continue until the end of the project in August 2022, helping to bring attitudinal change through the open sharing of information and experiences and consensual decision-making.